A arena that brings together millions of robotics experts and researchers, a contest of engineering, strategy, and team challenges. It ’s the champion of the DJI RoboMaster AI Challenge that closed recently at the ICRA in Brisbane, Australia . Both I Hiter and the runner-up Critical HIT team created their robot team based on the modular NVIDIA Jetson TX2 supercomputer. The high-performance Jetson TX2 incarnates the "brains" of the award-winning robot team, giving them more wisdom and stronger combat capabilities, and they are invincible in the final confrontation.

Each team consists of up to 10 graduate and undergraduate students, who submitted their technical solutions in December last year. The competition lasted for several months, and the finalists were not announced until April this year. In the end, the final team went to Brisbane to compete for the $20,000 prize at the ICRA conference.

Many top universities in the world have participated in the competition, including Harbin Institute of Technology in China , Johns Hopkins University in the United States, the University of Melbourne in Australia, and the University of Alberta in Canada.

In this year's event, there are both experienced teams and first-time participants. The hardware platform that dominates the entire competition- Jetson TX2 also shines. In the final 22 robots, 14 of them all use Jetson.

RoboMaster referee Shuo Yang believes that Jetson's superior technical prowess and ease of use are the reasons for its popularity. Yang said: "We use TX2 because it has excellent tools for neural network training, machine learning, and target tracking and detection. The Jetson API is very easy for students to use."

The first-placed Harbin Institute of Technology team leader Zhong Xingguang explained: “Jetson allows us to use neural networks for parallel computing to facilitate visual computing, detect the opponent’s robot armor, and shoot targets accurately. If we use other platforms, we will Can't do this."

Ruiqing (Rui) Yin from the Johns Hopkins University team also believes that the CUDA compatibility of the Jetson TX2 module is a very important factor. He said: "Jetson TX2 can obtain powerful and CUDA-enabled modules for our robots, and it is a very economical way." 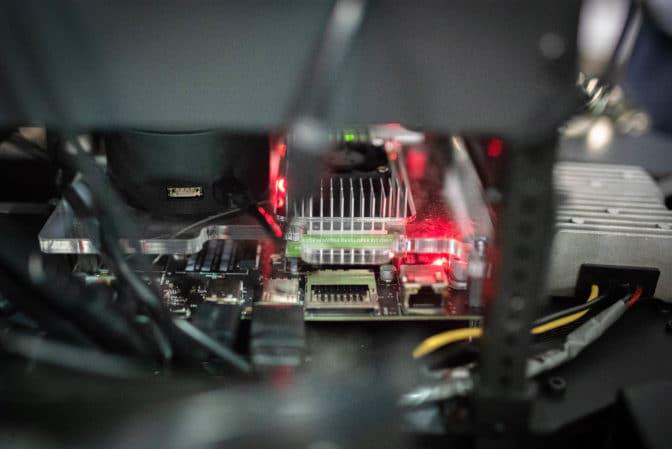 A participating robot equipped with Jetson

Paul Xu, vice president of Shenzhen DJI Innovation Technology Co., Ltd. (the main sponsor of the competition), the world’s leading drone manufacturer, said: “ DJI is not only passionate about developing outstanding drone technology, but also I hope to encourage and help young engineers to show their talents to the world and show the wonderful world that robots can help us achieve."